Negligent Entrustment in Illinois: Can I Borrow Your Car? 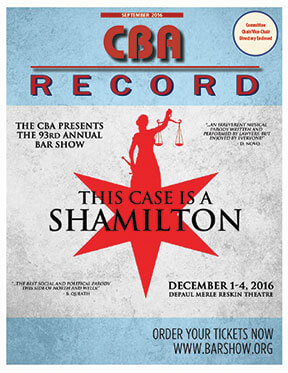 September 2016 – Grant Dixon penned an article for CBA Record, the prominent legal publication by the Chicago Bar Association. The topic is on negligent entrustment – the lending of one person’s property to another when the lender should know that the receiver is not qualified to use that property. The simple act of letting someone drive your car (or use your gun, i.e.) can have dire, life-altering consequences for the lender if the person borrowing the property is not properly suited to use it.

Shout Out: G. Grant Dixon, Attorney and Past Rotary President

September 13, 2016 – Q&A profile story on Grant Dixon ran in the Chicago Tribune. Mr. Dixon talks about why he loves his job, his favorite book and movie, a recent vacation, and his volunteer work.

Winter 2016 – A bylined article written by Dixon Law Office attorney Catherine D. Cavenagh is featured in this issue of the Trial Journal by the Illinois Trial Lawyers Association (ITLA). The article examines amendments made in 2011 by the Illinois legislature to the Workers’ Compensation Act that changed the way injured workers’ benefits are calculated. The most controversial change is the incorporation of the use of the most recent edition of the American Medical Association’s (AMA) Guides to the Evaluation of Permanent Impairment.

December 20, 2015 – G. Grant Dixon III is interviewed in this segment on Ringler Radio about car crashes and legal strategies in various auto accident cases that Dixon Law Office has handled.

November 30, 2015 – Dixon Law Office is featured in this story about “15-themed” donations it is making to three area charities around the firm’s 15-year anniversary.

November 23, 2015 – Dixon Law Office is featured in this story about how the firm is marking its 15-year anniversary with a series of “15-themed” donations to local organizations.

November 11, 2015 – Grant and Susan Dixon are quoted in this cover story article about the donations the firm is making to local charities for the holidays around its 15-year anniversary.

September 14, 2015 – Each year, the Western Springs Rotary Club hosts a Veterans and First Responders Steak Fry. Dixon Law Office is proud to be a part of this event each year. Read more about this year’s successful event in this Chicago Tribune story.

September 3, 2015 – G. Grant Dixon III of Dixon Law Office in La Grange is representing a Chicago woman who was struck by a vehicle while crossing in a crosswalk.

June 29, 2015 – Dixon Law Office is featured in this story about a jury delivering a $3.9 million verdict against a drunk driver for an accident in Oak Brook in 2011. Dixon Law Office represented the families in the case.

June 22, 2015 – NBC5 reporter Lisa Parker covered the story about a drunk driving personal injury trial in which the jury awarded the plaintiffs $3.9 million. Grant Dixon of Dixon Law Office handled the case and is interviewed in this news story.

March 20, 2015 – Grant Dixon was interviewed by WGN-TV as a legal expert to discuss the $26 million verdict against Yellow Cab and what this means for cab passengers.

March 21, 2015 – The family of Naperville’s Emily Driscoll filed a lawsuit Friday against the Plainfield man who killed her and her dog with his car in November 2014. Dixon Law Office is representing the family.

March 20, 2015 – In a lawsuit filed Friday in DuPage County, the family of Emily Driscoll filed a suit alleging wrongful death against Kenneth Holmberg, 74, of Plainfield. Dixon Law Office is representing the family.

March 20, 2015 – Dixon Law Office was hired by the Driscoll family after the death of their daughter.  Dixon Law Office founder, Grant Dixon, was interviewed by WBBM Investigative Reporter Cisco Cotto.  Listen to the full interview here.

December 30, 2014 – WGN-TV – Grant Dixon is a guest on the WGN Midday Show to discuss what you need to know to be safe when using ride-share services.

December 30, 2014 – CBS2 Chicago – Grant Dixon serves as legal expert source for this TV news story about an Uber driver who was sharing a profile with his wife and was charged with sexual assault.

Grant Dixon leads the charge for a global cause

Dixon Law Office has filed suit on behalf of two families seriously injured in a November 2011 crash.  The lawsuit alleges the defendant driver was severely intoxicated when he crossed the centerline of York Road in Oak Brook, Illinois.  The story was reported by the The Doings newspaper and can be found here.

Dixon Law Office founder, G. Grant Dixon III, is often consulted by newspapers, television and radio stations from around the world to comment about various cases and legal topics. Below are just some of the media reports citing to Grant Dixon.

LaGrange lawyer to ride across Iowa.  …the recreational cyclist says rolling over the pavement brings him the balance and clarity he needs to ride the extra mile in law.(Chicago Daily Law Bulletin, Volume 156, No. 139 Monday, July 19, 2010)

Accused Darien Killer once Lauded as Hero. Reports that Johnny Borizov saved an infant’s life in LaGrange and Grant Dixon was his attorney at the time. Grant Dixon is also quoted. (msnbc.msn.com, Mar 8, 2010)

Announcement of G. Grant Dixon III selection as Leading Lawyer published in the Doings of Elmhurst

Fatal post-party crash spurs lawsuit (Chicago Sun Times, p. 18, Jun. 6, 2006) Article about a fatal car crash where G. Grant Dixon III in quoted on behalf of one of the victims.

La Grange Personal Injury Attorney Appointed (The Doings, p. 46, Oct. 18, 2001). Reporting the appointment of G. Grant Dixon III to the Board of Managers of the Illinois Trial Lawyers Association.

“Lend a Shoulder” Visitor for a Day (Back of the Yards Journal (Chicago), p. 1, November 22, 2000). Report on the visit by G. Grant Dixon III to St. Joseph’s School in Chicago on “Lend a Shoulder Day” for Catholic Charities.

Amoco settles suits in worst cancer cases (National Law Journal, p. A4, Mar. 27, 2000). Reporting on the settlement of five cases in the matter. Notes G. Grant Dixon III is leading the charge of many other plaintiffs.

Amoco Cancer Claims Grow (Chicago Sun Times, p. 9, October 19, 1999). Report on filing of three new brain cancer cases against Amoco Corporation. One of the cases, by a former contractor, was the first suit against the company by a person with brain cancer who was not an employee of any Amoco company.

Amoco Employee Asserts in Illinois Complaint that he was Exposed to Toxic Fumes (Emerging Toxic Torts, p. 10, Aug. 18, 1999). Article discussing suit against Amoco and allegations made in that complaint. Notes G. Grant Dixon III as counsel for the plaintiff.

Amoco Releases Report of Findings (Aug. 5, 1999). Interviews with the following television stations, radio stations, and newspapers. Discussed the findings and criticisms of the report. Each television and radio show aired at various times during the day:

WGN AM 720, Chicago. Interview with the Bob Collins Show;

Something in the Air? (Business Insurance, p. 1, July 26, 1999). Article discussing problems at Amoco Research Center in Naperville. Focus on ventilation issues and employer prevention. Quotes G. Grant Dixon III as counsel for certain plaintiffs with suggestions for employers on how to prevent this type of tragedy.

The Price of Pain (Chicago Magazine, May, 1999). Article discussing hypocrisy of legislators and executives in Illinois government by advocating tort reform and yet using the legal system for their own tort cases. Quoting G. Grant Dixon III.

Deadly Crossing Must Be Fixed (The Doings, p. 19, Jan. 8, 1999). Letter to the editor complaining of dangerous crossing in Bemis Woods.

Man with Cancer Sues Amoco, Wants Info on Building 503 (Naperville Fre, April 3, 1998). Reporting on filing of suit in Amoco Naperville cancer case by Grant Dixon on behalf of the plaintiff.

Uniforms May Be Hyatt Attack Clue (Chicago Tribune, MetroChicago Sec., p. 1, July 10, 1996). Reporting on police investigation of attacks at Hyatt Regency in Chicago. A plaintiff in one of these attacks was represented by Grant Dixon.

Suit Charges Hyatt with Lax Security (Chicago Daily Herald, July 10, 1996). Reporting on filing of suit as a result of one of the attacks at Hyatt Regency in Chicago. Plaintiff was represented by Grant Dixon.

Possible Clue in Hyatt Case (Chicago Sun Times, p. 3, July 10, 1996). Reporting on police investigation of attacks at Hyatt Regency in Chicago. A plaintiff in one of these attacks was represented by Grant Dixon.

Chutist’s Plane Crash Linked to Engine Upkeep (Chicago Tribune, DuPage Sec., p. 1, Jun. 3, 1993). Discussing Hinckley Parachute Disaster and the NTSB findings. Quoting Grant Dixon as one of the attorneys for one of the families of the victims.